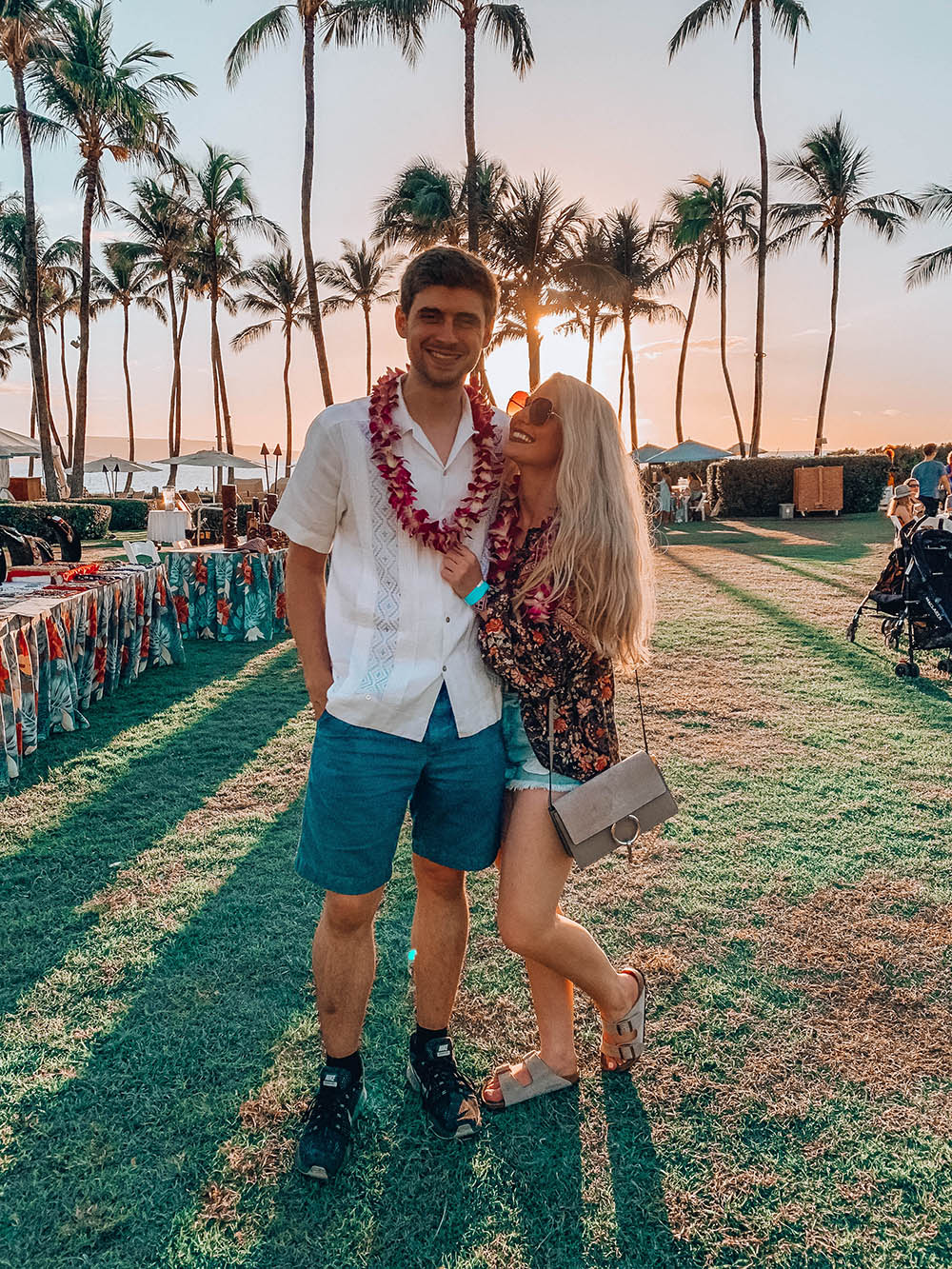 Austin and I recently traveled to Maui for our honeymoon, and to say it was a dream would be an understatement. It was our first time to Hawaii and we’re already dying to go back! It almost feels like you’re in another country – Maui very much has it’s own culture and vibe. Plus the entire island is just beautiful! There’s tons of options for things to do, and you can plan your trip to be as relaxing or as adventurous as you want. Read on for my tips on where to stay, what to do, and where to eat:

The Grand Wailea is what really made this trip truly special. The hotel itself is gorgeous with tons of incredible views plus it boasts nine pools, a private beach, three restaurants, and a spa. We got really lucky and were upgraded to a certain part of the hotel called The Napua Tower, which is basically like a private club. I highly recommend going this route and if I’m ever back in Maui, I’d 100% stay here again. When you stay in The Napua Tower, you have access to an awesome breakfast buffet, afternoon snacks, appetizers in the evening, a chocolate hour at night, as well as an open bar starting at 4pm daily. With food being so expensive on the island, this was a pleasant surprise for us!

We also thoroughly enjoyed the pools and the private beach. There are traditional pools, hot tubs, and a swim up bar, but we spent most of our time going around the lazy river and down the two slides! We had a great time at the beach as well – the water was so clear and the sand was really soft. It was incredibly clean and the water was never too cold! Later on during our stay Austin surprised me with a couples massage and a facial at Spa Grande, the spa on site and I cannot recommend that enough. It was so relaxing and the service, like everywhere else in the hotel, was outstanding.

A Luau is a must-do anywhere you go in Hawaii! There are tons of different options, but we chose to do the one at our hotel for simplicity. We were not disappointed! There was tons of food, an open bar, and the show was great. We paid a little bit extra for premium seating, which gave us one of the front tables so we really got to see everything up close. It was one of my favorite nights!

Snorkeling is another must when in Maui. We chose to go to Molokini which is about a 45 minute boat ride. We went with Four Winds cruise line and had a blast! All of our snorkeling gear, a yummy lunch, and an open bar on the way back were all included in the tickets and the crew was very knowledgable and friendly.

Austin and I have both always wanted to try surfing, so we decided to give it a go while we were in Maui! I will say that it’s definitely harder than it looks, but even if you only get up once it’s well worth it. We did private lessons at Surf Shack with James and he was awesome. He takes Church, his dog, out with him and that little dude can surf better than us! We each got to surf with him on our boards too which was fun.

Austin loves ziplines so right when we decided we were going to Maui, this was one of the first things we booked. There are a few ziplines in town, but we went with Maui Zipline Company which is the biggest one. The views were phenomenal and the service was top notch.

If you only go parasailing once in your life, do it in Maui! The views from up high were unbeatable and it’s such a rush. It was my first time ever having been parasailing and I’d definitely do it again. We went out with UFO Parasailing and I definitely recommend! I felt safe the whole time and the crew was super helpful and nice. It was another favorite for us!

So Austin planned most of the trip since I was so busy with the wedding planning (yes, he’s a saint) but I found Maui Craft Tours. Naturally I discovered it because it’s all about eating and drinking! On our tour, we went to a local coffee house to start, a winery, a goat dairy, and a distillery. It was all so much fun and gives you a taste of local things on the island. Lastly, our tour guide was awesome! We really enjoyed talking to her and being born and raised in Maui, she gave us some great recommendations.

The classic touristy thing to do in Maui. Basically if you don’t do the Road to Hana, did you even go to Maui?! The Road to Hana is essentially just a really long, all day route with tons of places to stop for water falls and other natural wonders. There are so many points of interest that it’s impossible to hit them all, but my favorites were Twin Falls, the lava tube, and Black Sand Beach. Overall this wasn’t my favorite thing we did on the trip because it makes for a really long, tiresome day. Every single spot is filled with tourists and the road you have to drive on is really long and winding. Also, food and bathrooms are pretty scarce, and being a girl… when there was a decent restroom the line was oftentimes out the door. With that being said, it’s still one of those things you just have to do when you’re in Maui because there are some pretty incredible things to see. I personally just preferred our other activities more. Be sure to pack a rain jacket – this is the wettest part of the island!

Since we had a lot of complimentary food from our hotel, we really didn’t need to eat out much. But, we did want to book one nice dinner so we made a reservation at the famous Mama’s Fish House. Like all of the restaurants on Maui, it is expensive but it’s definitely an experience worth shelling out some extra coins for. The ambiance is amazing and the fish is caught daily so it’s super fresh! We started with the sashimi sampler as an appetizer then we both ordered the stuffed Mahi Mahi and it didn’t disappoint. We finished off the meal with The Black Pearl (fancy chocolate mousse) for dessert. Suffice it to say, we were stuffed. It is a large restaurant but it’s definitely a touristy “thing” so a reservation is a necessity. If you’re planning a trip to Maui and want to get one, book it as early as you possibly can as they can get fully booked even 3 weeks out.

Austin and I stumbled upon this food truck prior to our surfing lessons. It was right around lunchtime so we decided to give it a try. We hadn’t had any poke yet so we were dying to get some and this ended up being some of the best we had on our entire trip! The prices were pretty reasonable, the portions were large, and everything was of course very fresh.

This is kind of a random spot that you wouldn’t necessarily expect to be able to get good poke since it’s a liquor store, but this is a great spot. One of our tour guides recommended it to us and we’re so thankful that they did! The cool thing about Tamura’s is that their selection is huge. Pretty much any kind of poke you could possibly want, they’ve got it. We got a few different ones so we could have an assortment, but I wish we’d been able to try them all!

You have Successfully Subscribed!

You have Successfully Subscribed!